Over the last decade biodegradable packaging has become a viable alternative to plastics. Biodegradable materials are made out of biopolymers, which are polymers made of naturally occurring molecules. They are often used in conjunction with metal containers to help seal perishables, like food and cosmetics. When used with metal containers they typically are found in the form of films, coatings, and bags. 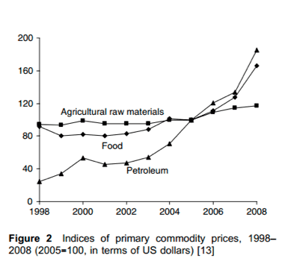 The use of plastic products has skyrocketed over the last 20 years. This rise in plastic use has contributed to the skyrocketing price of petroleum, which has now surpassed the price of food and raw agricultural products. The increased price of petroleum has pushed even more producers to use biodegradable materials in packaging, as they are made with cheaper raw materials [1]. These biodegradable packaging forms are generally seen as a positive improvement over their plastic alternatives. Even though this is the case biodegradable materials have both positive and negative effects on the health of the environment and humans.

The environmental effects of a product on the environment is determined through a Life Cycle Analysis (LCA). This looks at all of the effects of a product from its production until it has completely decomposed [1]. Biodegradable polymers are better for the environment than plastics in almost every way. They require less use of fossil fuels, produce less waste water, create less air pollution, and cause less damage to natural ecosystem functions. One of the main issues with the production of plastic is the amount of energy required in their production, which leads to Greenhouse gasses being released and global warming. The production of biodegradable polymers has been shown to require significantly less energy than plastics, ranging from 25-54 MJ/Kg of energy compared to 77-81 MJ/Kg for plastics [1] [2] [3]. 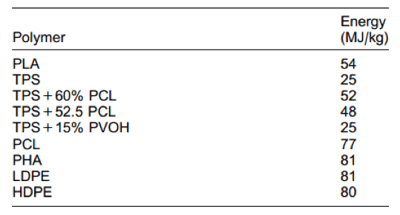 Even though biodegradable polymers are much better for the enviornment than plastics they still do have negative effects of their own. The produduction process requires fossil fuel energy, which exaterbates climate change. Aditionally, the overuse of agricultural products for biopolymers can put stress on natural ecosystems by pushing for a monocrop system. This can lead to decreased soil fertility in a region, reducing the yield of agricultural products. Lastly, as the amount of biodegradable packaing increases there will be an increased demand for the agricultural products used in their production [1] [4]. This demand will have to be met by increased agricultural yeilds, which requires more natural land being converted to agriculuture, and altering natural ecocystems.

The effects of biopolymers on human health are still being researched, but a few trends have become apparent. Biopolymers made of carbon chains have been shown to not have any direct negative health effects for humans or land animals. For aquatic life they have been shown to reduce the oxygen uptake by gills. Overall, biopolymers decompose into relatively benign products that cause minimal direct health problems.

Most of the negative health effects of biopolymers are secondary. As with any form of production that releases greenhouse gasses biopolymer production creates smoke, which can cause respiratory issues like asthma. In addition, the increased demand for agricultural products will push farmers to use more fertilizers, which have been shown to lead to cancer and other harmful diseases. Fertilizers are ingested by workers using them, consumers eating them, and by consuming contaminated water [8].

The production of biopolymers and plastics both have negative health effects associated with the use of fossil fuels, but biopolymers are at a much lesser degree. Plastics utilize substantially more fossil fuels than the amount used with biopolymers. Less greenhouse gasses means less chronic disease, like cancers and malnutrition [7]. Currently 12% of the world’s population is malnourished and climate change has been exacerbating the problem.  Additionally, severe child malnutrition causing wasting has been increasing at an alarming rate, such as in South Asia where nearly 17% of all children under 5 are affected [6]. 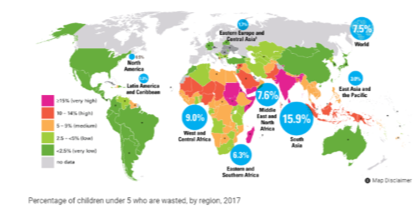 Biopolymers decompose into naturally occurring polymers, unlike plastics. Plastics can take hundreds of years to fully decompose and often release toxic compounds in the process. Toxins from plastic have been shown to kill helpful bacteria found throughout environments and bioaccumulation in fish [9]. Biopolymers form natural molecules that are commonly found in nature. They do not release any toxins and easily assimilate into natural ecosystems [4].

Biopolymers and biodegradable packaging have a wide range of negative and positive effects. As a common alternative to plastic packaging they have a much smaller carbon footprint. Additionally, they have overall minimal health effects and do not directly lead to any health problems for humans. That being said their production still does utilize fossil fuels for energy and promotes the use of harmful fertilizers and pesticides. It is widely accepted that biodegradable packaging, especially when used in conjunction with other forms of metal packaging, is a good alternative to plastic.